Porsche of the sky

For decades Porsche has been producing powerful and reliable engines, not only for sports cars on the ground, but also for aircraft in the sky.

Porsche designers have also left their mark in aviation. On 16 January 1986, after more than six months, 300 take-offs and landings and 600 flying hours, Michael Schultz and Hans Kampik had almost made their way back to the small airfield in Donaueschingen. The list of what they had endured in their Mooney 231 was jaw-dropping: icy storms over Alaska, tropical weather in New Guinea, overzealous narcotics officers in Ecuador, extremely jittery military personnel in the air space above Angola. And now a blizzard was raging over the runway. Yet the small aircraft managed the last stage of its circumnavigation of the world – a triumph for man and machine. The 3.2-litre Porsche PFM 3200 aircraft engine had used 23,000 litres of premium fuel and 30 litres of oil, defied heat and cold and negotiated 100,000 kilometres in the air without complaint.

The PFM 3200 was by no means the first aircraft engine from Porsche.

The history of Porsche aviation began in 1908. As technical director of the Austrian Daimler-Motoren-Gesellschaft in Wiener Neustadt, Ferdinand Porsche’s task was to take on the engineering design of a four-cylinder airship engine for the Austrian military gas balloon of Major von Parseval. When the dirigible took off on its maiden voyage on 26 November 1909, and the four-cylinder engine set the balloon’s air propellers rotating for the first time, Ferdinand Porsche was hovering in the gondola above Wiener Neustadt – and was able to assure himself of the serviceability of his design at first hand.

One year later, Ferdinand Porsche was performing as a racing driver. In what is known as the Prinz Heinrich car, he won the race for touring cars over a distance of just under 2,000 kilometres. The 80-hp, four-cylinder engine – designed of course by the driver himself – powered the car to a sensational top speed of 160 km/h. It soon became apparent to Porsche that the engine has the potential for a third dimension – and he continued developing the four-cylinder engine to create a version for the Taube monoplane conceived by the Austrian aviation pioneer Igo Etrich.

In the following years, Austro-Daimler under the management of Porsche designed numerous aircraft engines: engines with four, six or twelve cylinders and up to 400 hp, which were deployed in aircraft such as the Etrich-Renntaube designed for racing, flying boats and the Lohner-Pfeilflieger (Ludwig Lohner’s Arrow-flier). In 1935, four years after founding his own engineering design office in the centre of Stuttgart, Ferdinand Porsche once again directed his energies towards aviation. The Type 55 aircraft engine produced an impressive 1,000 hp. It was followed by the Types 70 and 72, with 16 and 32 cylinders. In 1937, the office received an order that impressively demonstrated the close symbiosis between automotive and aviation engineering: Porsche was entrusted with the task of designing the Mercedes-Benz T 80, a racing car intended to set the world land speed record. Its drive system was the Daimler-Benz-DB-603 bomber engine. Displacing just under 45 litres, the engine unleashed a colossal 3,500 hp – ultimately the vehicle was aimed at breaking the 600 km/h barrier between Dessau and Halle. In 1939, the monster took up its position on the test stand for the first time. However, the outbreak of war thwarted the planned record attempt.

Flying with the flat engine

In 1955 – Ferdinand Porsche’s son Ferry was now running the company – permission was granted for aircraft production to extend from gliders to include powered flight. Porsche recognised the potential in the field of sports aircraft and already had a suitable motor available as the basis for further developments in Zuffenhausen: the Porsche 356 was achieving magnificent sales – and was equipped with a powerful and efficient four-cylinder flat engine, also known as a boxer-four. Soon afterwards, Porsche presented the first post-war aircraft engine on this basis, with the Type 678 ranging from 65 to 75 hp. It was used in aircraft such as the Rheinflug RW-3, the first German small aircraft to go into production after the Second World War, and in the Elster, which the Bonn-based engineer Alfons Pützer designed on behalf of the newly founded German Federal Armed Forces.

Round the world PFM 3200 Mooney D-EAFE

Modern Porsche aircraft engines, the 911 of the sky

Closer to today, the 911 took to the sky in 1976, when the British company, Airship Developments, developed the SkyShip 500. In 1981 it set out on its maiden flight, powered by the Porsche 911 Turbo – two Type 930 engines were on board. Pilots and amateur engineers had already tested the compact, powerful sports engines from the 911 models in sports aircraft. Its reliability and air cooling meant that the powerful flat engine of the 911 was ideally suited to its role as an aircraft engine. It additionally produced a high output with a comparatively low consumption of premium fuel. The opportunity then arose to go into production to make a specific aircraft engine.

At the beginning of the 1980s, the creative minds at the development centre in Weissach set to work: they transformed the sports car engine of the 911 into an aircraft engine with dual ignition, a second alternator, a spur gear drive for the camshaft and other modifications.

On 8 August 1982, a Cessna 182 Skylane became airborne from the Mindelheim-Mattsies airfield south of Ulm in Bavaria. On board was the Porsche PFM 3200. Its mission was to complete the approval programme for the new aircraft engine. In 1984, the Porsche engine received approval from the German Aviation authorities, and in 1985 from their American counterpart, the FAA.

As from 1987, the six-cylinder engine from Zuffenhausen went into serious production.

Round the world PFM 3200 Mooney D-EAFE

Even today, the PFM 3200 still outshines conventional production aircraft engines. A Cessna 182 flying in cruising mode, for example, would use just 13 litres of premium fuel over a distance of 100 kilometres. Equipped with a muffler, the engine is also significantly quieter than other engines and became known as the “Flüstermotor” or “whispering engine”.  However, the greatest triumph was its ease of handling: it required only one operating lever with automated electronic ignition and fuel mixture control.

Despite its technical superiority, however, the aircraft engine had little economic success. The PFM 3200 simply appeared on the market at the wrong time: despite all the earlier forecasts, worldwide sales of small aircraft engines stagnated at the end of the 1980s. Relatively low prices for aviation fuel, particularly in the USA, make the upgrading of existing planes with the modern, efficient engine unattractive.

Deliveries of Cessna, Robin and Mooney aircraft amounted to only 80 units. For the few proud owners, however, the PFM 3200 was the consummate aircraft engine. It still enjoys cult status among sports pilots, its performance and reliability are legendary and the circumnavigation of the world by Michael Schultz and Hans Kampik is a lasting memory. And despite all the economic losses, there was one gain in technical terms: “We had to completely redraft the engine of the 911 for the approval process,” Peter W. Schultz recalls.

(Modified from newsroom.porsche.com) "Porsche above the clouds".

In August 2016, at the invitation of Porsche aircraft engine specialist Uwe Sauter, Heubach Airport near Stuttgart was again transformed into a Mecca for exclusive aircraft that have a history with Porsche. 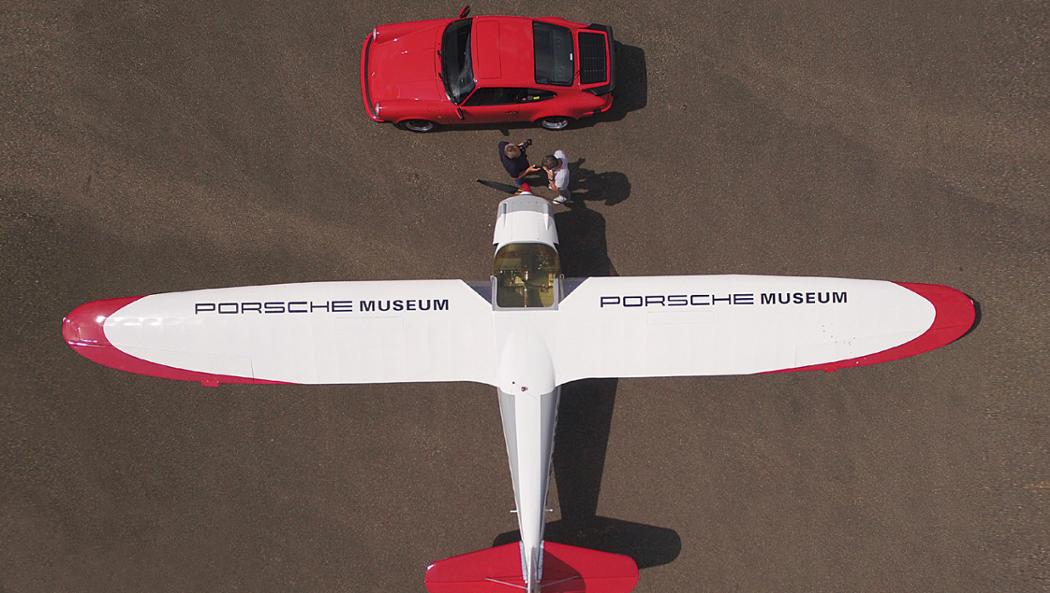 The sportscar manufacturer’s aircraft engines make up a small but extremely interesting chapter in the rich history of Porsche. It is a story which reaches far back in time, as more than 100 years ago Ferdinand Porsche also used aircraft engines to establish the reputation of a diverse engineering company that would later become the company Porsche.

In 1955, when the aircraft engine ban in Germany was lifted in line with the Paris Agreements, it was recognised at Porsche that the air-cooled four-cylinder boxer engine of the 356 would also be suitable as the basis for an aircraft engine. And so came about the Porsche 678 aircraft engine with power outputs from 52 to 75 hp, which was built right into the 1960s, and powered among other things the prototype of the first German post-war aircraft to be built in significant numbers, the Pützer Elster. Since September 2010, the Porsche Museum has therefore looked after the company’s tradition not only on land but also in the air, with a carefully restored Pützer Elster B (www.elster-porschemuseum.de), even if the series production machine does not have a Porsche engine due to maintenance and spare part requirements.

Later, Porsche took up the matter of aircraft engines again. Similarly to the development of the Type 678 aircraft engine, in the early 1980s it was the six-cylinder boxer from the 911 that caught people’s attention, and in September 1983 flight testing began for the Porsche aircraft engine PFM 3200, with a displacement of 3200 cubic centimetres. To comply with the redundancies required for aircraft engines, the 204 to 220 hp engine gained a dual ignition and two alternators, and the camshaft drivetrain was converted from chain to spur gears. It became known in the history of aviation as the “whispering engine”, and indeed it runs very quietly even for today’s standards and is impressive in its excellent consumption values. Thanks to fuel injection and optimum-efficiency reduction gear, a Mooney for example consumes just 35 litres per hour instead of the 50 litres or more typical for a Lycoming engine. 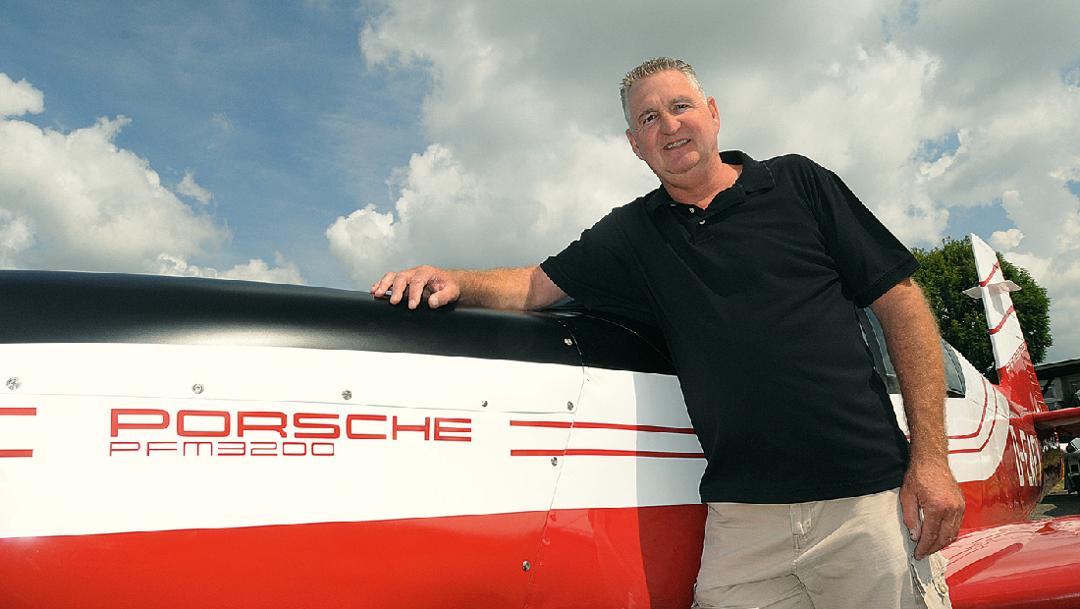 In times like these when fuel is precious and above all expensive, this is just one good reason to tend to and look after the Porsche engine, and Uwe Sauter from the airport in Heubach is today’s global specialist in this. In the early 1980s, he became involved in the development of this power unit in Weissach, and since leaving the sportscar manufacturer after the production and development of the PFM engine was discontinued in 1991, he has taken care of the remaining 22 of around 80 engines originally built in Europe, Australia and the USA.

Every few years, Sauter invites the pilots of the Porsche faithful to come along with their planes and this time, thanks to wonderful summer weather, no less than nine treasures of aviation still equipped with the PFM 3200 engine lined up next to the Pützer Elster and the Scheibe Sperling. Among them, the two former Weissach experimental aircraft for engine testing of the Cessna 182, the Weissach Mooney made to test the PFM 3200 Turbo which never entered series production, itself on the verge of being completely restored, and the famous flight-around-the-world Mooney, with which Porsche proved the reliability of the new aircraft engine in a circumnavigation of the globe in 1985.

(Modified from newsroom.porsche.com) "Sovereignty in the sky".

We have 110 guests and no members online